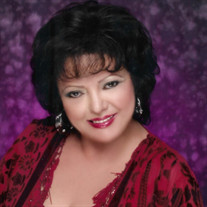 Susan Andrade Nuñez, affectionately known as “Susie”, was born on May 15, 1950 in East Los Angeles to Macario Robert Andrade and Consuelo Andrade (née: Ceniseroz). She was the third of four children: Angela, Robert “Bobby”, and Lorraine. Susan was dedicated to her parents and grandmother, who were her central focus and influenced all that she did. Susan was a lifelong resident of Los Angeles. She graduated from Mark Keppel High School in 1968 at the age of 18, and paid for her own graduation photos. On November 4, 1979, she married Tomás Cardenas Nuñez, whom she met while working as a hostess at Luminarias. On September 30, 1986, after not knowing the gender of their baby and experiencing a previous loss, they welcomed their son, Thomas Andrade Nuñez, who was the most important part of her life. From an early age, Susan demonstrated a life of care-taking and service—from working at home as a young girl, to her first official job at age 15, to working at various companies in her twenties and thirties, then opening her own restaurant in the early 1980s, all while investing in real estate and eventually becoming a self-employed property manager, which she personally managed for the rest of her life. Susan loved to cook and would make enough food to feed an army. She would always explain that it’s better to have more food than not enough, and always found herself cooking the recipes in the quantities she’d use for her restaurant. She was an avid sushi connoisseur, and loved to take people to her favorite restaurants because they were “the best”. She loved shopping and had an affinity for fashion, “bling”, and had an eye for antiques and opulent décor. She was incredibly sentimental, collecting keepsakes, photos, furniture, and porcelain dolls throughout the years. She decorated in an intentional and reverent way, with her mother’s influence in mind. Susan enjoyed listening to music that made her feel nostalgic—mariachi and Spanish ballads were the closest to her heart. More than anything else in this world, she loved her son, Thomas, and when her grandchildren were born, the rest is history. Susan was a woman of strong faith. From her childhood growing up with a traditional Catholic family, she attended mass consistently, praying, and always believing that God was with her. Her faith helped shape who she was, and she always spoke about how God would take care of her. During the fall of 2007, Susan became born again and began attending Calvary Chapel Montebello, and later served in ministries like Hospitality and Meals on Wheels, attended Women’s Ministry and Retreats, hosted a baptism at her home for the Junior High Ministry, and diligently sat in the second seat of the front row of the Sanctuary every Sunday. Susan’s greatest ministry was sending daily scriptures individually to people in her contacts list on her phone. She touched many lives through her ministry and shared the Gospel with her diligence and love for those in her life. Susan Andrade Nuñez peacefully went home to be with the Lord on Sunday, November 14, 2021. She will be lovingly cherished by her son and daughter-in-law, Thomas and Natalie Nuñez, her grandchildren, Rosh, Karis, and Zara Nuñez, and her sisters, Angela Andrade and Lorraine Andrade. Susan held the memory of her parents, Macario Robert Andrade and Consuelo Andrade (née: Ceniseroz), her brother, Robert “Bobby” Andrade, and her grandparents, Pete and Guadalupe “Lupe” Ceniseroz. And although their marriage didn’t last, the friendship that Susan and Tomás shared endured all the way until his passing on October 11, 2011. Condolences for the family can be sent through our website.

The family of SUSAN ANDRADE NUNEZ created this Life Tributes page to make it easy to share your memories.

Send flowers to the NUNEZ family.