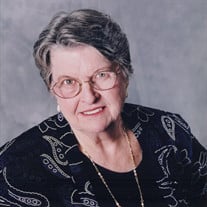 Sharon passed away April 5, 2022 in Pasadena, California after almost 94 years of a very full life. She was born Frances Sharon Hale, May 9, 1928, at Hollywood Presbyterian Hospital to Frank Sherman Hale and Helen Elizabeth Moore. Sharon grew up in Redondo Beach having fond memories playing on the beach with her sister, and of large loving family gatherings. She grew up during the Depression and WW II before going to college at UCLA. While there Sharon met and married Peter Charles Miller. After graduating from UCLA with a Bachelor of Science, Sharon returned to Redondo Beach to start her family life. Moving to Torrance, she worked as a registered dietician, and raised their four children. Later Sharon married John Graham and moved to Anaheim. Unfortunately, John soon passed, but Sharon continued living in Anaheim for many decades. Her bright, outgoing personality provided her with many friends. During her life Sharon excelled at careers in dietetics and computer science. Always trying to better herself, she received her Master of Science in Software Engineering at the age of 62. After retirement, she volunteered in many ways, most notably teaching computer classes at Cal State Fullerton’s OLLI and serving as a lay minister at her church. Her hobbies included traveling, managing investments, playing bridge, and socializing with her many friends. Sharon is survived by her loving family: Sister: Betty Valles Children: Eric Miller, Theresa Shugard, Craig Miller, and Ted Woods Seven grandchildren and six great grandchildren. Sharon will be greatly missed, but the family is comforted that she had a long and joyful life. The family requests, in lieu of flowers or gifts, please donate to any charity in Sharon’s name. Sharon’s favorite charities are the Center for Spiritual Living and OLLI at CSUF. Condolences may be sent to the family through our website.

The family of SHARON HALE GRAHAM created this Life Tributes page to make it easy to share your memories.

Sharon passed away April 5, 2022 in Pasadena, California after...