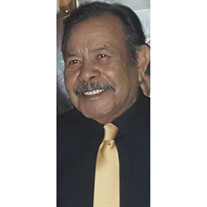 Ricardo "Richard" Rodriguez, 80, was born on June 4, 1941 in Los Angeles, California to Juan Rodriguez and Rosa Martinez, and entered into eternal rest on September 27, 2021 in Downey, California. Ricardo dedicated 4 years of service while enlisted in the United States Air Force and was honorably discharged for his honorable and faithful service to our great nation. Ricardo also spent over 30 years of hard work working for a fireplace manufacturer. Ricardo is survived by his loving family: Wife, Delia Rodriguez, Children, Sandra Rodriguez and her wife Lisa Marinez, Cynthia Mendoza and her husband Mario, Esther Brock, Ricardo was bless to be a Grandfather to Stephanie, Jonathan and Gabriel, as well as 3 Honorary Grandchildren, 4 Honorary Great Grandchildren, 2 Honorary Great Great Grandchildren, Sister, Maggie Pacheco, 2 Furbabies, Ashes and Pepper Rodriguez, along with other family and friends who will miss him dearly. Ricardo was reunited with his parents Juan and Rosa, along with his 9 siblings and furbaby Ginger Rodriguez, when he arrived at the gates of Heaven. The aforementioned preceded Ricardo in death. Condolences for the family can be sent through our website.

The family of RICARDO "RICHARD" RODRIGUEZ created this Life Tributes page to make it easy to share your memories.

Send flowers to the RODRIGUEZ family.