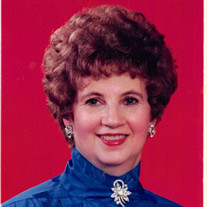 Naomi Ruth Lathrop, 93, was born on August 30, 1928 in Revloc, Pennsylvania to Richard Guy Deemer and Lillian Gertrude Chick, and entered into eternal rest on February 13, 2022 in Montebello, California. Naomi Lathrop, or “Teena,” as she was better known, loved to be involved and lived a full life. When her children were younger, she was the mother that was the girl scout leader, the PTA president, and the biggest fan and supporter of all of their endeavours, from baseball games to art contests. She was also a second mother to many of her children’s friends, with some even living with the family for a time. As her children grew older, she went back to work. Her first job back in the workforce was at Montgomery Wards where she proudly worked her way up to Personnel Manager. She was very well loved and continued working there until she retired. After retirement, she began to work for her son. She managed his tax office for many years until she was about 82 years old. When she became a grandmother, she devoted herself to her grandchildren as she had with her children and created many special memories with them such as taking them to movie shoots and Disneyland. In her later years when she could no longer be as active physically, she loved to spend time with her children and grandchildren at her home. Family gatherings at Olive Garden, trips to the hairdresser to visit with her friends, playing games of Scrabble and Yahtzee, and watching shows filled her days. She even helped her daughter grading papers and she took the time to leave positive comments on each one. She was a wonderful mother and grandmother who will be greatly missed but these wonderful memories will live forever. Naomi is survived by her loving family: Children, Larry Lathrop and his wife Wendy, Lisa Lathrop, Lillian Jacobs and her husband Cole, 5 Grandchildren, 3 Great Grandchildren, along with other family and friends who will miss her dearly. Condolences for the family can be sent through our website.

The family of NAOMI RUTH LATHROP created this Life Tributes page to make it easy to share your memories.

Send flowers to the LATHROP family.