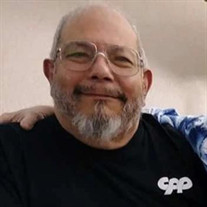 Michael Cornelius Duran, born Sept. 21, 1949 to the parents Benjamin and Minnie Duran, at Murphy Memorial Hospital in Whittier, CA. He attended Wallace S. Wiggins Elementary School in Whittier, CA then went to Los Nietos Jr. High in Santa Fe Springs, CA. He was a Cub Scout of America, then a Boy Scout during this time. His father was the Scout Master. He graduated in 1967 from Whittier Union High School. Michael enlisted in the army where he was assigned to Germany. He returned to Whittier, CA after serving his county honorably. He went on to work as a technician for an oil refinery for 28 years. Michael is survived by his loving family, his sister, Victoria Smith of Las Vegas, NV, his brother, Chris Duran of Ontario, CA, his niece, Kimry Gallagher of Lakewood, CA, his nephew, Kenneth Cook of Pico Rivera, CA, and his niece, Kerrin Smith of Temecula, CA. Michael was met at Heaven's Gate by his sister, Lupe Cook. He will be greatly missed by those who knew and loved him. Condolences may be sent to the family through our website.

The family of MICHAEL DURAN created this Life Tributes page to make it easy to share your memories.

Send flowers to the DURAN family.