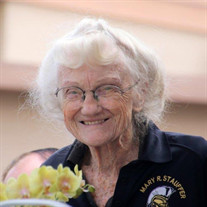 Dr. Mary Ruth Stauffer went to her Lord February 11, 2021 at the age of 103 six weeks after a positive COVID-19 test. Her beloved family and Downey community will greatly miss her generosity, the twinkle in her smile, and her spontaneous sense... View Obituary & Service Information

The family of DR MARY RUTH STAUFFER created this Life Tributes page to make it easy to share your memories.

Send flowers to the STAUFFER family.