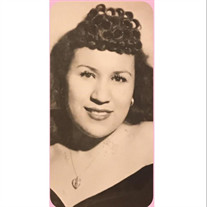 On January 1, 2022 in Pico Rivera, CA, Martha Loya Carlon (93) made her journey to the Heavens. The last of her family's generation, Martha was born on January 19, 1928 in Blythe, CA to her loving parents Frank Loya and Gertrude Garcia. Her time in Blythe wasn't long as the family traveled through California before finally settling in Pico Rivera, CA. One of eight children, Martha grew up strong from an early age and remained so until the very end. A woman who led by example instead of talk, her strength and courage could only be matched by her sweet, gentle soul and independence. A woman with a heart of gold, Martha learned early what a good work ethic meant to her character as she helped out within the community and the local school system. She received plenty of awards for her selfless service and was the first of her family to graduate from Whittier High School. As time progressed she eventually married and had children. A caring and loving mother, Martha put her family above everything else. Despite life's hardships, she did right by her kids as she raised them alone most of the time. Martha was a simple woman who enjoyed dancing and listening to her music (Freddy Fender and Johnny Cash being her favorite musicians) or watching T.V. shows such as Hunter, Seinfeld, and "Charlie" (Two and a Half Men). However, her favorite enjoyment was going to the casinos and scratching lotto tickets. Even if she had all the money in the world she would still want her scratchers. Her other hobbies included cooking, sewing, and crocheting. She had a strong faith in the Higher Power and would read her prayers every day. A true survivor, Martha always remained upbeat even when life was hard. She lived a long, wonderful life that many never get to experience. She was loved by everyone who crossed her path and admired by all who knew her. Martha is survived by her loving family: Daughters Alice Soliz, Norma Villerreal, Nanette Rincon, Carole Duran, and Son Arnold Carlon. Grandchildren: Marlene Ramos, Nanette Hernandez, Marcie Lucas, Doreen Rincon, Raylene Rincon, Marie Rincon, Leslie Soliz, Rosanna Villalobos, Cassandra Rincon, Dennis Duran Jr., Robert Rincon, and Ashley Rincon. Great Grandchildren: Brianna Hernandez, Angela Ramos, Jessica Martha Ramos, Leita Lucas, Skyy Rincon, A.J. Hernandez, Nicholas Hernandez, Mikey Ramos, Jack Lucas, Lara Lucas, Melanie Ramos, Colgan Villalobos, Kenneth Sanchez, and Bridgette Villalobos. And great, great Granddaughter Hailey G. Ramos. Martha leaves behind a legacy that touched many family members and friends. She is joining her parents, siblings, and other family and friends in that big Mansion in the Sky. She will be in our hearts forever. Love you, G-Ma. May you Rest in Paradise. Condolences for the family can be sent through our website.

On January 1, 2022 in Pico Rivera, CA, Martha Loya Carlon (93) made her journey to the Heavens. The last of her family's generation, Martha was born on January 19, 1928 in Blythe, CA to her loving parents Frank Loya and Gertrude Garcia. Her... View Obituary & Service Information

The family of MARTHA LOYA CARLON created this Life Tributes page to make it easy to share your memories.

Send flowers to the CARLON family.