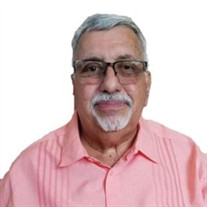 Luis Arturo Cordon, also known as “Gordo” by his wife, Irma, was born on September 5, 1945 in Guatemala to Ismael Cordon and Lydia Martinez. He entered into eternal rest on January 1, 2022 while at his home in Stanton, California at 76 years old. During his early years in Guatemala, he graduated from the University of San Carlos, Guatemala and worked as a systems analyst. Luis met his love, Irma and they married on March 30, 1974 and had a son together, Luis Fernando Cordon, which he adored and who later gave him two grandchildren, Francois and Melissa Cordon, with his daughter-in-law, Yesenia Cordon. In 1988 he moved his family to the United States to chase the American Dream. He later took on the role of a father again when he graciously chose to help raise his wife’s grandchildren as his own, Paola and Dianne Moran. While living in their home in Whittier, California, Luis dedicated over 12 years as a branch manager in the banking industry. Luis loved nothing more than to sit at the table over a delicious meal with his family talking about current events and his next travel plans. He was a sports enthusiast, in particular baseball, and could insight you with all of the teams’ history, especially his team, the New York Yankees. In 1982, he fulfilled one of his dreams of attending the Yankee series play-off games and enjoyed sharing the story of his days at Yankee stadium. Luis is preceded in death by his beloved brother, Julio Cordon. Luis is survived by his wife of 47 years, Irma Cordon, Children, Luis Fernando Cordon, Paola Moran, and Dianne Moran, Grandchildren, Francois Cordon and Melissa Cordon, as well as Granddog Penelope, along with other family and friends who will miss him dearly. Funeral services and reception will be held on January 23, 2022 from 10:00am to 1:00pm at Risher Mortuary, 1316 Whittier Blvd., Montebello CA 90640. Condolences for the family can be sent through our website.

Luis Arturo Cordon, also known as &#8220;Gordo&#8221; by his wife, Irma, was born on September 5, 1945 in Guatemala to Ismael Cordon and Lydia Martinez. He entered into eternal rest on January 1, 2022 while at his home in Stanton, California... View Obituary & Service Information

The family of LUIS ARTURO CORDON created this Life Tributes page to make it easy to share your memories.

Send flowers to the CORDON family.