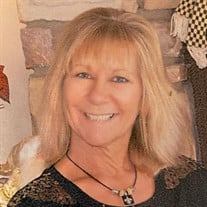 Lorie Geraths (Lori Ann Whitaker) was born on May 3, 1961, and entered into eternal rest on May 28, 2020 in Whittier, California, at the age of 59. Lorie Geraths Whitaker was the daughter of Jerry & Joyce Whitaker, (Birth Mother Pamela Ann Whitaker). Lori was born in Long Beach, California. Lorie called Huntington Beach, California her home town, until 1977 then she moved to Westminster, then Fullerton, and spent her adult life in a few cities. Finally settling in Bellflower, California in 2012. She attended elementary and secondary school in Fountain Valley till 1975, then she attended high school at Edison High School in Huntington Beach from 1975 to 1977. She graduated from Troy High School in Fullerton,CA in 1979. Lorie Worked at Safeway from 1980 until joining her work family at Calivas Inc. in April 1990. She worked for Vic Caliva for 30 years. She loved Vic, Diana, and their kids, and considered Vic a second father. She Married Dean Allen Geraths Sr. in 1981, and had two great boys, Dean Allen Jr. and Dustin Lee. She started seeing Steve Shaffer in 2000, and became a mother to his two boys, Ryan & Travis. Her best friend was Denny Wyatt. Her hobbies included gardening, bingo, and bowling. She loved dancing, car shows, the beach, football, drag races, and country music. Lorie loved her family, her work family, all at Rosewood Park (her home), and THE SAINTS! She was a mother of two, a mom of four, mother-in-law, grandmother of five, an aunt to many, a big sister, a sister-in-law, a daughter, a niece, a cousin, and a friend to many. Lorie Ann is survived by her loving family: Sons, Dustin (Alysea) Geraths of Murrieta, Ca. and Dean (Nicole) Geraths of Williamsburg, Va., Grandchildren, Ashton Geraths, Jaden Geraths, Kendyll Geraths, Colton Geraths, all of Murrieta, Ca., and William Geraths of Williamsburg, Va., Father and Stepmother Jerry Lee and Joyce Whitaker of Dinuba, Ca., Sisters, Kristy (Stan) Rossi of Norco, Ca. and Jodi Whitaker of Fox Lake, Il., Niece, Felisha Rossi of Costa Mesa, Ca., Nephew, Anthony Schesnol of Fox Lake, Il., among other family and friends who will miss her dearly. Lorie Ann was reunited with her mother Pamela Whitaker who preceded her in death.

Lorie Geraths (Lori Ann Whitaker) was born on May 3, 1961, and entered into eternal rest on May 28, 2020 in Whittier, California, at the age of 59. Lorie Geraths Whitaker was the daughter of Jerry & Joyce Whitaker, (Birth Mother Pamela Ann... View Obituary & Service Information

The family of LORIE ANN WHITAKER GERATHS created this Life Tributes page to make it easy to share your memories.