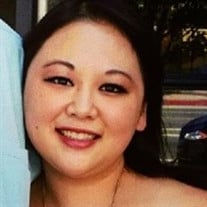 Karin Eileen Riutzel was born on March 4, 1987 in South Korea and she entered into eternal rest on August 18, 2020 in Palo Alto, California at the age of 33. Karin arrived in Glendale, CA in October, 1987, from Seoul Korea. She was 7 months old. Once we took her into our arms at the airport, she was the family’s little bundle of joy. As a toddler and young girl, she always made her presence known around the house, including going into older brother Kevin’s closet and deciding which toys she would take to play with in her room. Growing up and at school she made lots of friends and as is often the case, many relationships lasted well into her adult years. Everyone always knew what Karin thought and even heard her on national TV, announcing the opening of the Rosie O’Donnell Show on NBC at age 12. Her voice was never silent and never afraid to stand up for what she believed was right and fair. After the sudden and tragic loss of her mother at age 13, she showed fortitude and resilience by focusing on her family, friends and school. She graduated from Hoover High School and enrolled at the University of California-Riverside, earning a Bachelor of Arts in History. While attending college, she worked part time at a family owned restaurant. Using that experience she later joined the Benihana Restaurant organization in Anaheim, CA - a short time later being promoted to General Manager at their store in Houston at The Woodlands. Karin stood a little over 5 feet tall but her stature was head and shoulders above that in personality and maturity, always looking ahead for new adventures. She loved her family, was loyal to friends and associates and lived her life with integrity, passion and courage. She will forever remain ‘that bundle of joy’ in our hearts and minds. Requiescat in gratia Dei. Titus 2:7 She leaves behind her loving Family: Father, John Riutzel (Wife Sandra), Brother, Kevin Riutzel, Boyfriend, Miguel Lopez, Aunt, Marion Wells, and Aunt, Peggy Jenkins, along with other family and friends who will love and miss her dearly. Due to Covid-19, please contact the family for service information. Condolences for the family may be sent through our website.

Karin Eileen Riutzel was born on March 4, 1987 in South Korea and she entered into eternal rest on August 18, 2020 in Palo Alto, California at the age of 33. Karin arrived in Glendale, CA in October, 1987, from Seoul Korea. She was 7 months... View Obituary & Service Information

The family of KARIN EILEEN RIUTZEL created this Life Tributes page to make it easy to share your memories.

Send flowers to the RIUTZEL family.