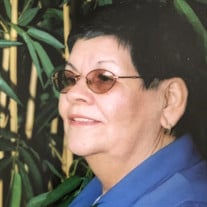 It is with great sadness that the Chacon Family announce Juanita Montoya Chacon, age 89, passed away on February 21, 2021, a long time Los Angeles county resident. She had many titles. Daughter, granddaughter, sister, cousin, aunt, wife, daughter-in-law, mom, sister-in-law, grandma, great grandma, and godmother. She was daughter to Albert Montoya and Catarina Alvarado. Second of nine children. Born in Pecos, Texas and moved to the Los Angeles area. Attending the local schools including Garfield High School. She married Francisco E. Chacon and had ten children. She was a professional home maker. She taught and Instilled good character, moral values, and lessons in honest work to her children. Crafts she most enjoyed were crocheting and knitting. A life time master of these lost crafts, she could not only follow a printed pattern, she could easily freelance a piece, improvise and create her own projects. She was also a great seamstress, making clothes for all her children as they were growing up. She especially enjoyed making Halloween costumes. She enjoyed reading, music, traveling, gardening, and trying new cuisines. She was also an expert In classic films. She became an avid walker and swimmer. Participating in several 5 K events in LA and Orange Counties, trained for 1/2 ma ration events and became a certified speed walker. She volunteered with the LA Leegers helping with the waters stations. She was also a cancer survivor. She is survived by two brothers, two sisters, nine children, three sons-in-law, three daughters-in-law, twenty grand children, four grand sons-in-law, seven grand daughters-in-law, and thirty seven great grand children, and seventy three nephews and nieces and several god children. Juanita Montoya Chacon will be laid to rest at Calvary Cemetery. Condolences may be sent to the family through our website.

The family of JUANITA MONTOYA CHACON created this Life Tributes page to make it easy to share your memories.

It is with great sadness that the Chacon Family announce Juanita...

Send flowers to the CHACON family.