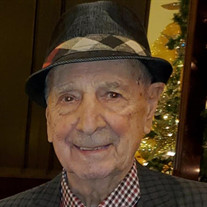 Joseph “Joe” Sapia passed away peacefully August 12, 2021 at his home in Downey, CA, of natural causes. He was surrounded by his family. He was 100 years old. Joseph was born November 30, 1920 in Pedace, Italy to Salvatore Sapia and Concetta Curcio. At the age of 9 years, Joe came to the United States with his mother, to join his father in Dearborn, Michigan. His two older sisters remained in Italy where they raised their families. While at school in Dearborn, Joe found a passion in music, learning how to play drums, piano, and clarinet. Later he became a conductor of concert bands, for which he also did the arrangements. Serving in the United States Army during World War II, he was part of the 20th Armored Division and one of the three Army divisions that took part in the liberation of the Dachau concentration camp. In April 1945, the 20th Division moved through Belgium and into Germany. Later that month, the 20th advanced into Bavaria, crossing the Danube River and capturing the city of Munich. Joe earned the European-African-Middle Eastern Theater Ribbon with Bronze Battle Star, American Campaign Medal, and a Good Conduct Medal. Along with his mother and father, Joe moved to Cudahy, California in 1950. Joe returned to Pedace, Italy, and married Dora Calvano in September 1953. Returning to California, they bought a home in East Los Angeles, where they had four children. In July 1955, Joe was employed as a machinist by Continental Can Company in Los Angeles. In July 1968 he became an apprentice tool & die maker; in March 1969 he became a qualified die maker. During his time at Continental Can, he became the leadman in its die shop, handling all the routine jobs and recurring crises that came up daily in plant operation. In May 1967, Joe received an “Idea Award” of $50 for his suggestion that two legs be installed at the very front of the Dexter unloader. In December 1985, Joe retired from the Continental Can’s City of Commerce Plant. (CCC was acquired by American Can Company in January 1986.) In July 1968 the family purchased a house in Downey, CA. He resided in that same home until his passing. Joe’s outside interest was music. He was the Director of the Monterey Park City Concert Band for more than 50 years, performing at Downey’s Furman Park, the Los Angeles County Fair, 4th of July Festivals at City of Commerce’s Bandini Park and Montebello’s Barnes Park, as well as Christopher Columbus events in San Pedro and San Diego, and feast day celebrations at St. Peter’s Italian Catholic Church in downtown Los Angeles. Joe was also part of a 3-piece musical combo, playing the drums and performing special private events. Every 1st and 3rd Tuesday each month, the group proudly performed at the senior citizen dance at the Barbara Riley Senior Center in Downey. Joe earned a lifetime teaching credential in adult education in music, tool & die making, and machinist, from the state of California in 1976. The family enjoyed traveling throughout the United States, visiting family and friends, and spending summer vacations at Dana Point and San Clemente. He is preceded in death by his wife Dora (Calvano) Sapia, to whom he was married 54 years. He is survived by his four children: Connie Sapia Molloy (Patrick), Salvatore “Sam” Sapia (Susan McKewen Sapia), Rose Sapia, and Robert Gaetano Sapia; two grandchildren: Brandon Sapia (Melissa Sapia) and Lindsey Sapia; and one great-grandchild, Stella Avery Sapia. Services will be Wednesday, August 25th, 2021 at St. Raymond’s Catholic Church, 12348 Paramount Blvd, Downey. Viewing 9:30 to 9:55am; Catholic funeral mass, 10:00am. Interment to follow, at All Souls Cemetery, Long Beach, CA. In lieu of flowers, the family request donations be made to: Downey Symphonic Society (downeysymphony.org) PO Box 763, Downey, CA 90241. You may leave condolences for the family on our website, www.rishermortuary.com.

The family of JOSEPH SAPIA created this Life Tributes page to make it easy to share your memories.

Send flowers to the SAPIA family.