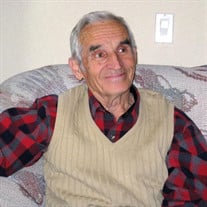 Joseph Braico “Joe” was born on June 30, 1926 to Simone and Giovanna Braico in a farm house in a small village in Northern Italy. On November 6th, 2020 at the rightful age of 94 and while his son Walter and Ileana were at his side, Joe took his last breaths and peacefully entered his eternal life. Joseph is survived by his brother Rodolfo and wife Liliana in Italy, son Walter and Ileana, his four grandchildren Dustin and wife Karah, Vanessa and husband Adam, David, and Hannah and Josh, and great-grandchildren Adriana, Juliet, and Leila. Working on the family farm with his father, Joe learned how to care for the land, produce wine and olive oil, and developed a green thumb. At the age of 18 he was drafted into the Italian Army and survived World War II until it ended in 1945. With minimal education and strong work ethic he endured the depression that occurred after the war until 1957 when he managed to leave with his wife Lidia. With only $200 in his possession they immigrated to Buffalo, New York with the hopes of starting a family in America. Having little money left, Joe was desperate to earn a living but refused to be recruited into a life of gangsters and crime as many other immigrants were at the time, thus became a laborer working hard in construction. Within the next couple of years Joe and Lidia had their two sons Frank and Walter, and shortly after they moved to California in search of warmer weather. Once in California, Joe worked with his best friend at an Italian Terrazzo Company for a few years before finding a job at McDonald Douglas Aircraft in Long Beach, for which he worked until his retirement. During the early years of his sons’ lives, Joe became known for his talents of growing their own vegetables, pruning roses, and grafting fruit trees to produce different fruits from one tree. He was also a frugal man. Once, he removed, straightened, and reused old nails from a neighbor’s old discarded wooden fence, and he also spent five years hand digging and building a wine cellar under the house, filling buckets of dirt he would dump at the edge of a riverbed on his way to work. He would also bring home animals like rabbits or ducks, which the boys would name thinking they were their “pets,” but somehow would end up missing and the boys would be told they were having “Italian chicken minestrone” for dinner! Joe overcame many challenging events during his lifetime. During the journey to California they suffered a roll-over accident in Flagstaff, AZ, which left his oldest son Frank visually impaired. Frank was involved in a tragic vehicle accident when he was 18 years old that left him physically and mentally disabled and Joe’s wife Lidia tragically took her own life due to depression at age 51, just two years after Frank’s accident. Remaining strong was the only option for Joe. Eventually he remarried in 1981 to Gloria, and at age 63 he retired in 1989. During his 36 years of marriage to Gloria they did some traveling and remained active in the Catholic religion. After retiring, he dedicated his time helping his son Walter in his construction business and becoming involved with his grandchildren and great-grandchildren. He shared his wisdom with them and his love of gardening and parmesan cheese, would bring them figs and fruit from his garden, and taught them respect for their elders. Although Joe was frugal he was very generous and made sure to financially provide and support his grandchildren with the education of their choice. The last chapter of his life, Joe was faced with the loss of his second wife Gloria in 2017 and the loss of his son Frank in August of 2020. Joe left quite an impression on anyone he had a relationship with. To his grandchildren and great-grandchildren he was lovingly known as “Grandpa” or “Nonno” and will be tremendously missed! Out of respect for Grandma Lidia: we are sending him home in proper shoes, clean slacks and a clean shirt! Due to COVID-19 restrictions, please keep your masks on and practice social distancing during Joseph's funeral services. Condolences may be sent to the family through our website.

The family of JOSEPH BRAICO created this Life Tributes page to make it easy to share your memories.

Send flowers to the BRAICO family.