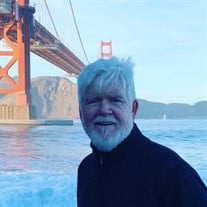 John Anthony Curran, 62, of Laguna Niguel, CA, passed away on November 1, 2020, after a 12 year battle with Parkinson’s disease. He was born to parents Jim and Peggy Curran on December 27, 1957, in Milford, Connecticut. John is survived by his mother and his three siblings, James, Kathy, and Margo. John was predeceased by his father Jim and his older sister Mary. John is also survived by his wife, Rosie, and four children - Mackenzie, Meaghan, Mollie, and Maggie. John graduated from Pioneer High School located in San Jose in 1976 and completed a Bachelor of Arts in Economics from UCLA in 1980. He was the first in his family to attend college. At UCLA, he met his college sweetheart, Rosemarie Padovani. After graduation in 1980, he moved back to the Bay Area to work in the emerging tech industry, focused on hardware sales. By 1984, John and Rosie officially tied the knot after dating for four glorious years. Over the next forty years, they had four children and created a beautiful life together throughout California. John's family meant a great deal to him. He was unendingly proud of his large and loving family, especially when the whole family was together. He celebrated a long and successful career but always found time to be at every single family event. John was most known for his love of sports. In his later years, John discovered that the Pioneer football team had coined the term “Curranizing” after a teammate or opponent stuck a hard tackle. Outside of work, John spent most of his free time watching and coaching his children in various sports including football, basketball, and soccer. Even when John was diagnosed with Parkinson’s in 2008, he continued to celebrate his kids, both on and off the court. He coached his youngest daughter, Maggie, with his oldest daughter, Meaghan, for four years and led the team to numerous victories. Whenever you would hear a roar in the stands, you knew that Coach Curran was cheering you on. John is also known for his humor and quick wit. He had incredible timing with some of the best one-liners around. He enjoyed sipping Jameson on the rocks and had a love for a good piece of dark chocolate. He thoroughly enjoyed a good strategy game - his children always put up a good fight to take his crown, though rarely succeeded. John was an avid traveler. He instilled a great love for the outdoors to his family including long hikes, fishing, and camping. However, for his 60th birthday, his family discovered that he would rather spend time in luxury hotels instead of camping - go figure. One of his last expeditions was a road trip to Death Valley in October 2020 to gaze at the Milky Way with Rosie and Maggie. He will always be remembered in the stars, sunsets, and sunrises. John was a great man, husband, brother, son, coach, friend and father. He is missed greatly by all of his family and friends. Condolences for the family can be sent through our website.

John Anthony Curran, 62, of Laguna Niguel, CA, passed away on November 1, 2020, after a 12 year battle with Parkinson&#8217;s disease. He was born to parents Jim and Peggy Curran on December 27, 1957, in Milford, Connecticut. John is survived... View Obituary & Service Information

The family of JOHN ANTHONY CURRAN created this Life Tributes page to make it easy to share your memories.

John Anthony Curran, 62, of Laguna Niguel, CA, passed away on...

Send flowers to the CURRAN family.