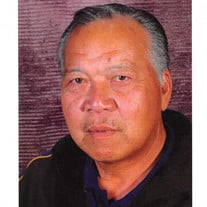 Joe Surjana, 74, was born in Jakarta, Indonesia to Na Kun Yu and Tan A Da, and entered into eternal rest on January 15, 2022 in Anaheim, California. Joe Surjana also known as Na Giok Liang, was a family man, great friend, foodie, and accomplished traveler. He was the oldest son of 6 siblings. Joe moved to California in 1987. With immense courage, he left everything he had known for the first 40 years of his life in order to begin from scratch in another country for the sake of his children’s future. He has worked as an independent contractor for the past 22 years of his life before retiring few years ago. Anyone who truly knew him knew he had such a big heart and would do anything for friends and family. He will be remembered as a friendly, caring, stubborn, complicated, but kindhearted man. He loved to chit chat, listen to blues music, go fishing, and watch travel and food channels. His number one passion was to drive and visit all states in the US. His favorite food was Chinese, Mexican, In and Out, and of course Indonesian. Joe was a smart and independent learner who was self-taught and knew how to fix almost anything. Joe is survived by his loving family, Wife: Hanyta Surjana, Children: Lia and Roy Purwanto, Meiliana and Frankie Surjana, Herman and Clara Surjana, Grandchildren: Jessica, Joseph Purwanto, Ethan, Dylan Surjana, Breyton and Brentley Surjana, his siblings, siblings in law, mother in law, along with other family and friends who will miss him dearly. “You never said I’m leaving, you never said goodbye. You were gone before we knew it, and only God knew why. A million times we needed you, a million times we cried. If love alone could have saved you, you never would have died. In life we loved you dearly, in death we love you still. In our hearts you hold a place that no one could ever fill. It broke our hearts to lose you, but you didn’t go alone. For part of us went with you, the day God took you home.” Author Unknown. Condolences for the family can be sent through our website.

The family of JOE SURJANA created this Life Tributes page to make it easy to share your memories.

Send flowers to the SURJANA family.