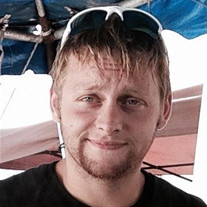 Our beloved Jesse Ben Budnick passed away Saturday, April 25th, 2020, after a long, cruel battle with the turmoil of addiction. Though we feared his death for more than a decade, we had hopelessly believed it would never come. Jesse was born... View Obituary & Service Information

The family of JESSE BEN BUDNICK created this Life Tributes page to make it easy to share your memories.

Send flowers to the BUDNICK family.