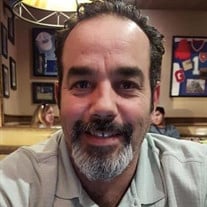 Jeffrey Michael Shipley passed away due to complications from Multiple Sclerosis on November 19, 2021. He was 49. Jeff was born May 22, 1972 in Downey, California, the son of Colonel (Skip) and Brenda Shipley. He graduated from Downey High School. Shortly after graduation, he began working for his uncle, Michael Richardson, in his construction business. He was his right-hand man for over 15 years. He was a hard worker and a fast learner. Jeff later became a master electrician and was very proud of his work at QuickWire Electric where he worked for the past 13 years. In addition to being a hard worker, Jeff was also funny, loyal, and generous to a fault. He would help anyone at any time of the day or night. Jeff was a wonderful and devoted son, grandson, nephew, uncle, cousin and friend. He loved his dog, enjoyed fishing and hunting, and spending time at the Colorado River. Although he battled it like a warrior, MS got the best of him. Jeff was predeceased by his brother, John; his sister, Wendy; and his grandfather, Vernon Richardson. He is survived by his parents, his fiancé, Dodi Moore; his grandmother, Mary Richardson; his aunt, Carla Shipley-Governale; his uncle, Larry Richardson; his aunt and uncle, Lisa and Michael Richardson; his sister-in-law, Melinda Shipley-Beggs; his cousins, Emily Dukes-Richardson, Blythe Post, Carly and Taylor Richardson, Jason Governale, and Sarah Governale-Sullivan; and his niece, Elizabeth Gaston; and nephews, Daniel and Andrew Shipley. A celebration of his life is planned following the New Year at Calvary Bellflower Church. Date and time TBA. Those who wish to remember Jeff in a special way may make gifts in his name to: Calvary Bellflower Church - Celebrate Recovery 14722 Clark Ave. Bellflower, CA 90706 Condolences for the family can be sent through our website.

Jeffrey Michael Shipley passed away due to complications from Multiple Sclerosis on November 19, 2021. He was 49. Jeff was born May 22, 1972 in Downey, California, the son of Colonel (Skip) and Brenda Shipley. He graduated from Downey High... View Obituary & Service Information

The family of JEFFREY MICHAEL SHIPLEY created this Life Tributes page to make it easy to share your memories.

Jeffrey Michael Shipley passed away due to complications from...

Send flowers to the SHIPLEY family.