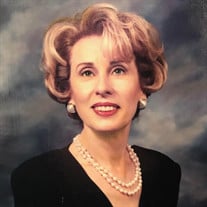 Mrs Jane Jacqueline Page (Jeanne Jacqueline Doyon) unexpectedly went home to be with Jesus on Friday March 5, 2021, at the age of 83. A cherished mother, grandmother, sister, and aunt, she is survived by her daughter Kimberly McBride Delgado, son Steven McBride, step-daughter DeeAnna Castle, eight grandchildren, three great grandchildren, beloved sisters Muriel Graan and Lauraine Doyon, brother Paul Guy, dear niece Debbrah Boilard, loving nephew Grael Graan, and many other precious nieces, nephews, cousins, and friends. Jane is predeceased by her brother David Guy, her treasured Aunt Clara Ouellette who was like a second mother to her in Auburn, Maine, and her beloved Aunt Yvonne Doyon. Born to Wilfrid and Rose Doyon on September 17, 1937, in Auburn, Maine, Jane's first language was French, learning English when she was three. She later took French in college and stayed active with French clubs throughout her life. She earned a Bachelor of Arts degree in sociology and a minor in psychology from Cal State Northridge in 1971 and then worked as a sales rep for a pharmaceutical company for several years. She later became a planned giving executive at the Braille Institute and after that at the University of Southern California garnering millions of dollars in donations for both foundations. Jane was a devoted follower of our Lord and Savior Jesus Christ and was a member of Lake Avenue Church in Pasadena for many years. She was a worldwide traveler, an amazing gourmet cook, a wine connoisseur, an accomplished seamstress and clothing designer, and a talented artist who enjoyed taking many painting classes. The epitome of elegance, style, and glamour, she was a fantastic ballroom dancer and would often be given the floor so that everyone in the room could admire her beauty and gracefulness. In the eighties she took flying lessons and succeeded in making her first solo flight to become a licensed pilot after which she bought a small Cessna and made many memorable trips with her co-pilot to Mexico, Canada, and around the USA. Upon retiring, she moved to Atherton Baptist Homes in Alhambra in 2012 where she enjoyed participating in the many social activities. A cast member of the resident run theater group, the Atherton Players, she starred in their first production, the Adventures of Calamity Jane. Charming everyone she met, Jane lived life to the fullest and will be deeply missed, her influence remaining forever in the lives of all who knew her. A memorial service, officiated by Pastor Steve Morgan of Lake Avenue Church, will be held at Risher Montebello Mortuary Chapel. Please contact Kimberly, Jane's daughter, for more information if you would like to attend. Condolences may be sent to the family through our website.

Mrs Jane Jacqueline Page (Jeanne Jacqueline Doyon) unexpectedly went home to be with Jesus on Friday March 5, 2021, at the age of 83. A cherished mother, grandmother, sister, and aunt, she is survived by her daughter Kimberly McBride Delgado,... View Obituary & Service Information

The family of JANE JACQUELINE PAGE created this Life Tributes page to make it easy to share your memories.

Send flowers to the PAGE family.