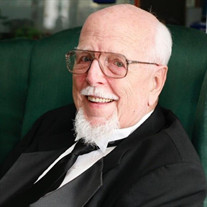 Harry C. Niethamer was born in Secaucus, New Jersey on May 10, 1928, to Paul and Elsa, recent German immigrants. Harry grew up happy and fearless under their watchful eye, trying his hardest to fight in World War II as a 17 year-old, only to... View Obituary & Service Information

The family of HARRY C NIETHAMER created this Life Tributes page to make it easy to share your memories.

Harry C. Niethamer was born in Secaucus, New Jersey on May 10,...