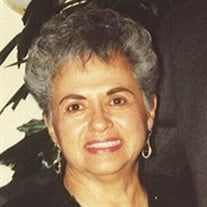 Gloria LeNoue, who was affectionately called “Maga” by her grandchildren, departed her loving family on Friday, July 2, 2021. Gloria was born at home in East Los Angeles on March 26, 1932, to Benita and Juan Chavez. Gloria was mother to John, James, and Edwin. She raised her children with love and devotion in South San Gabriel alongside her husband Keith. Gloria was known for her small stature and BIG personality. She shared many entertaining stories from the various times in her life, including when she worked as a waitress, a secretary at Dietrich Post (where she met her husband), and as a school bus driver for 30 years, most notably for Perez Special Education Center in ELA. Her hobbies included cooking for her family and friends and staying very involved at St. Anthony’s Catholic Church where she edited the weekly bulletin. She was most proud of her family, including her upbringing in ELA where her parents raised her and her six siblings, to the memories of her husband’s 50-year career at Dietrich Post. Gloria cherished her sons who showered her with love and respect to her last breath. She bragged endlessly about her grandchildren whom she adored above all. Gloria was always ready to support her family in so many ways. She stepped in to be a motherly figure to her 10 nieces and nephews when her sister-in-law, Clarinda, lost her battle to cancer at a young age. Family celebrations were so important to Gloria and she made sure everyone always had a welcome seat at the table. Gloria was a mighty woman, daughter, sister, aunt, wife, mother, grandmother, and friend. She was a role model of strength and devotion to her last days. She taught us all about respect and demonstrated unwavering love. She is survived by her sons John, Edwin (Ana Marie), James (Tabatha); her 8 grandchildren Megan, Keith, Alison, Austin, Carter, Logan, Austin, and Tanner; and her sister Esther. After 11 years, Gloria is now reunited with her darling husband, Keith, before our heavenly Father and Savior. Rest in Peace Gloria. A memorial mass will be held at St. Anthony’s Catholic Church on Friday, July 23, 2021, at Noon.

Gloria LeNoue, who was affectionately called &#8220;Maga&#8221; by her grandchildren, departed her loving family on Friday, July 2, 2021. Gloria was born at home in East Los Angeles on March 26, 1932, to Benita and Juan Chavez. Gloria was... View Obituary & Service Information

The family of GLORIA LENOUE created this Life Tributes page to make it easy to share your memories.

Gloria LeNoue, who was affectionately called “Maga” by her grandchildren,...

Send flowers to the LENOUE family.