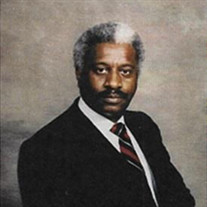 Everette was born on October 3, 1931 in Greensboro, North Carolina to Golis and Vivian Hayes. He lived in Greensboro through college and his military years. He often bragged about attending James Benson Dudley High School because it emphasized science and mathematics before it became popular. Everette constantly bragged about being at the top of his class along with his two brothers, Rudolph and Robert Hayes who preceded Everette in death. We would be remised if we did not mention Everette’s Grandmother, Mamie Crenshaw. Like all Grandmas, she always defended and supported him all the days of her life. Everette was also preceded in death by his favorite Brothers-In-Law – Wayne Brown and Reginald Hall. However, he leaves behind an impressive family legacy of outstanding individuals that are prepared to take up his mantel of excellence – his wife, Velma Davis-Hayes, a sister, Linda Hayes, a former librarian; a sister-in-law – Pastor Joan Hall; a brother-in-law – Sterling Brown - Fort Detrick Procurement Officer; a sister-in-law in the Lord – Charise Davis; 3 daughters – Kenya Davis-Hayes, a college professor, Bernadette Amaker, a retired social worker and Joan Booth, a public school teacher; Nephews – Demitrius Hall, a clinical case manager administrator and Kelly Athey, a pharmaceutical sales representative; Miles Athey, a high school student; a niece, Michelle Smith, MD; 5 grandchildren – Jeremy Booth, former professional baseball player, baseball analyst and former baseball scout and Andrew Booth, in convalescence, Jacob Booth, a high school student; Marlena Corona-Davis, a paralegal, Evan Corona-Davis, a Kindergarten student and Elizabeth Corona-Davis, too early to tell; 2 sons-in-law – Aaron Booth, Attorney-At-Law and Cesar Corona Corral, Marketing Director and a Pacific Council Mexico Foreign Policy Fellow and devoted in-laws – Señor and Señora Mauro Corona and Consuelo Corral and Cesar’s sister and her husband, Barbara and Emilio Pastor Rodriguez who are real estate developers in Mexico; Cesar’s Brother, Mauro Corona Corral who is an industrial designer; Kenya’s Gammie, Maxine Manley, and a host of extended family and friends. Everette served for many years in the US Air Force and upon his honorable separation from the military, he completed a degree at North Carolina A & T College and later secured employment in the aerospace industry as an Engineer in Los Angeles County. Years later, he made an occupational transition to Business Development Sales Engineering. Everette was highly successful in sales and as a result, he received countless awards acknowledging his achievements. After retirement from this career, he became a Real Estate Developer. Everette lived a full and Godly life and we loved him for it. Rest In Peace Ye Man Of God and Mighty Warrior! Condolences may be sent to the family through our website.

Everette was born on October 3, 1931 in Greensboro, North Carolina to Golis and Vivian Hayes. He lived in Greensboro through college and his military years. He often bragged about attending James Benson Dudley High School because it emphasized... View Obituary & Service Information

The family of EVERETTE L HAYES created this Life Tributes page to make it easy to share your memories.

Everette was born on October 3, 1931 in Greensboro, North Carolina...

Send flowers to the HAYES family.