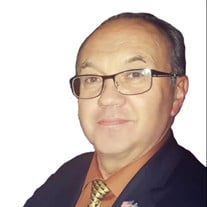 Daniel Robert Nagl Sr., 64, was born on July 29, 1957 in Yugoslavia to Vaso Nagl and Ljubinka Jevtik, and entered into eternal rest on February 7, 2022 in Colorado. Daniel Robert Nagl Sr. was born in 1957 in Vrnjacka Banja, Serbia. Dad had come to the US, to live with his Father a handful of years after his birth. At the age of 8, he worked in his Father's Carvel Ice Cream shops and Pizzerias. Rain, hail or snow, he walked and walked to wherever he needed to be. Growing up in the 60s and early 70s, was a prime time, as Dad called it. Dad traveled back and forth from Serbia and the US throughout the time. It wasn't until 1975 that life brought Dad to meet Mom. It was during a sound check of a performance Mom was about to begin. Dad said it was, Love at First Sight!! Dad married the love of his life on January 18th, 1976 and was married for 46 years. Mom was his precious love, to have and to hold, for better, for worse, for richer, for poorer, in sickness and in health, to love and to cherish, until death physically parts them to later be reunited into the Kingdom of Heaven. Dad was blessed with three sons and one daughter, his children were his life, aside from his Wife. Dad graduated from being a Father and became a Grandfather, when his Daughter gave birth to a Grandson, he was so ecstatic!! Orthodoxy was a huge part of who Dad was. Attending and/or volunteering for church gatherings, festivals, fairs, traveling to the Monastery in AZ, anything surrounding our religion and faith was where Dad had peace in his heart. Dad loved the outdoors. Dad refereed Futbol (soccer) for most of all his children's youth to young adult years and even thereafter and professionally. Dad loved riding motorcycles, he owned several throughout the years and was always excited when he and Mom would take trips on his motorcycle either out of town or state. Dad valued work ethic, he was a jack of a bunch of trades, however he was consistently either an Auto Mechanic and/or worked in Aerospace. Dad worked two jobs and sometimes even three; he was beyond a hard worker. Dad truly was a Godly man, devoted, compassionate, intelligent, kind, warm hearted, helped those beyond his own means, selfless, passionately cared for his family and above all, was a true Family Man. Dad was devoted to his Wife and Family first, no matter what, Dad could always be counted on. Daniel is survived by his loving family: Wife, Radmila Nagl, Children, Dejan Nagl, Alan Nagl, and Angela Valdez and her husband Joseph, Grandchildren, Dominik Valdez, Michael Valdez, and Jakob Valdez, Siblings, Snezana Nagl, and Robert Nagl, along with other family and friends who will miss him dearly. Condolences for the family can be sent through our website.

The family of DANIEL ROBERT NAGL SR created this Life Tributes page to make it easy to share your memories.

Send flowers to the NAGL family.