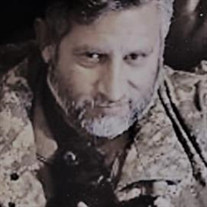 Daniel Mercado, 53, was born on October 31, 1967 in California to Manuel O. Mercado and Maria Elena Gallegos, and entered into eternal rest on August 7, 2021 in Georgia. Daniel served in the United States Army and earned an honorable discharge upon his completion of service to our great nation. After his time in the army, Daniel became a police officer to serve the local community. Daniel was a kind, loving, thoughtful, generous, and gentle man. He was always one for a good laugh & jokes that had to be whispered. “Danny” didn't just love from his heart, he loved from his whole being. He was many things but most of all he was genuine. Daniel is survived by his parents, Manuel & Maria Elena Mercado of Pico Rivera, CA, sister, Doralina Tichy and his wonder twin Diana Huff, as well as his brother Manuel Jr.. Daniel is also survived by his children; Tabatha Carlina Mercado, Karina Maria Winters, Ciara Daniella Mercado, Isaac Daniel Mercado & Samuel Ian Mercado. He was a loving grandfather to 4 grandchildren, Preston Villasis, Collin, Quinn & Calen Winters. He also had many nieces & nephews that loved and looked up to him. Daniel (Danny) will be missed deeply by many friends & family. Danny has left an indelible mark upon everyone he has touched. As we will carry him in our hearts forever let us close with a message of how he wanted to be remembered from the man himself… The Untold History of Daniel Mercado as written by Danny: "I was born and raised with my siblings in * EAST LA.* I was always curious, I believed in God, but it was somewhat of a mystery on why things were always kept away from thae layman. I always felt that God, the most high would want us to know him without the mystery and be known to everyone on a personal basis.” “I always knew as a child that I would go to the service for a short time and then become a police officer. I served in the US Army from 1985-1991 in a mechanized infantry unit in Germany and in Ft. Stewart, Georgia. It was quite an experience and enjoyed and one I was very proud of. Shortly after I was discharged from the military I served as a police officer in a coastal Georgia city." May Danny find his peace with God and rest, we shall meet again … Condolences may be sent to the family through our website.

Daniel Mercado, 53, was born on October 31, 1967 in California to Manuel O. Mercado and Maria Elena Gallegos, and entered into eternal rest on August 7, 2021 in Georgia. Daniel served in the United States Army and earned an honorable discharge... View Obituary & Service Information

The family of DANIEL MERCADO created this Life Tributes page to make it easy to share your memories.

Send flowers to the MERCADO family.