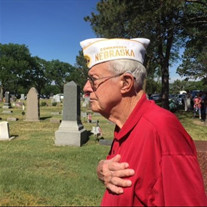 Carmon L. Wheatcraft, 96, was born on May 18, 1924 in Boynton, Oklahoma to Ralph L. Wheatcraft and Helen A. Kucera, and departed to Post Everlasting on March 28, 2021 in West Covina, California. For love of God and Country, Carmon served in the United States Army during World War II having fought in the Pacific Theatre and received a Purple Heart for being wounded in action. He later received an honorable discharge for his honorable and faithful service to our country. As a proud Legionnaire, Carmon was elected to the position of Department Commander for the state of Nebraska American Legion in 1989. Carmon also devoted over 35 years as owner/operator of a grocery store. Carmon is survived by his daughter Connie (Greg) Brown of Palm Springs, CA, son, Jeffrey of West Covina, CA. Granddaughter, Jessica (Ben Guthrie) Thomas of Westchester, CA, sister-in-law, Jean Wheatcraft of Crete, NE., devoted best friend Chuck Anneke of West Covina, CA, goddaughter, Linda Parsons of San Juan Capistrano, CA. Nieces and nephews, Diane, David, Don, Mary, Kirsten, Gary, Dan, Bonnie, MaryLynne, TyAnne and Julie. Also, many adored grand nieces and grand nephews, all who were so attentive to their Uncle Carmon. Carmon was preceded in death by his wife Joan, in 2002, parents, Ralph Wheatcraft, in 1937 and Helen Wheatcraft Bernhard, in 2012, brother Erman “Bud” Wheatcraft, brother-in-laws and sisters-in-laws, Alden and Marie George, Elmer “Buster’ and Hermi George, George and Doris George, John and Lorine Steinberg, A.D. Kadletz, Don Dodge and Thelma Kadletz Dodge and Joe and Genevieve Gray, nieces, Debbie Wheatcraft Misenhelter, Marilyn Schmidt, nephew, Bob Steinberg. A celebration of life gathering will be held Friday, May 14 from 4-5:30 at Gerdes-Meyer Mortuary. A memorial service will be held on Saturday, May 15 at the Grace Lutheran Church, 1100 ‘G’ St., Fairbury, NE. Luncheon at 12:00 noon, followed by memorial service at 1:30. Burial with military honors immediately after at the Fairbury Cemetery. Memorials in his memory to: Fairbury Cemetery Association, P.O. Box 408, Fairbury, NE 68352 God, Father of us all, we consecrate our dearly departed loved one, Carmon, into your keeping. Let us remember himfor all his actions and deeds with pride and love. Bless our departed comrade and keep him unto you. Please bless these family members and friends now in their great sorrow and need. Let them remember our comrade with reverence knowing he is in your care. Thank you Lord. Amen

Carmon L. Wheatcraft, 96, was born on May 18, 1924 in Boynton, Oklahoma to Ralph L. Wheatcraft and Helen A. Kucera, and departed to Post Everlasting on March 28, 2021 in West Covina, California. For love of God and Country, Carmon served in... View Obituary & Service Information

The family of CARMON L. WHEATCRAFT created this Life Tributes page to make it easy to share your memories.

Send flowers to the WHEATCRAFT family.