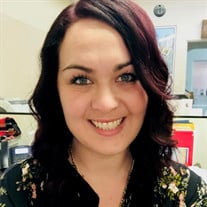 Brittany Rose Davis, 34, was born on July 20, 1986 in Downey, California to Randy Davis and Vicky Perea, and entered into eternal rest on January 2, 2021. Through hard work and dedication, Brittany was employed as a service manager for a Ford... View Obituary & Service Information

The family of BRITTANY ROSE DAVIS created this Life Tributes page to make it easy to share your memories.

Send flowers to the DAVIS family.