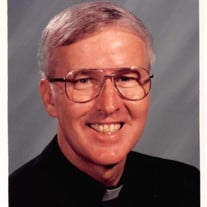 Brother Tony passed away after a long time of suffering from cancer. He is preceded in death by his parents Clarence H. and Rose M. Wiedemer (Stauble) and his brothers, Edward and Thomas. He is survived by his sisters, Rita Stone and Theresa Kotheimer. Brother Tony was born Bernard Joseph on May 2, 1942. Later that month he was baptized at St. Elizabeth Parish in Louisville, Kentucky on May 24, 1942 and confirmed at St. Elizabeth’s on April 21, 1950. He attended St. Elizabeth Catholic School from 1948 through 1956. He completed his high school education at St. Xavier High School in Louisville in 1960. He spent the next three years working and discerning. In 1963, he decided to become a brother in the Congregation of the Mission. He entered the novitiate on December 20, 1963, and at the end of December 1965 he pronounced vows. His ministry in the community was that of house treasurer. From 1965 until 1970 he was the assistant treasurer at St. Mary’s Seminary in Perryville. It was here that he learned the ins and outs of the job that he was to continue in throughout his life in the community. In 1970, Br. Tony was assigned as treasurer to the new novitiate program at St. Mary’s Seminary in Santa Barbara, California. He not only kept the books, but he also served as a role model and a kindly ear to the novices during his years “on the hill.” Several novices began to seriously consider becoming brothers because of his example. From the warm, sunny climate of Santa Barbara, Br. Tony was assigned to the snowy, gray landscape of DeAndreis Seminary in Lemont, Illinois. Once again those who encountered Br. Tony found a trusted friend. He was not a bean counter. He was a kindly, generous man who cared about those with whom he lived. He saw his mission as making the cultural climate welcoming and inviting. Brother Tony returned to California in 1984 and took on the assignment of Business manager for St. Vincent de Paul Parish in Los Angeles. St. Vincent’s is a busy place, with plenty of activities. Once again, he entered the life of the parish and became a presence. Working in a parish where many people spoke Spanish and you do not, could be daunting. Yet, Br. Tony’s care and love was able to break through the barriers of language into the universal language of faith, hope and charity. He was the welcome face at the food pantry. Br. Tony took pictures with each of the First Communicants at St. Vincent’s. Mothers and their daughters, first communicants all, shared pictures of themselves with Br. Tony. He continued in this work for over twenty years. In 2015, Br. Tony continued to serve St. Vincent’s Church, but in a more laid-back way. He still had some supervisory duties, helped with distribution of communion at Mass, and kept the vigil light dispenser full. The autumn of 2021 was a difficult one for Brother Tony. His health failed him. Battling cancer, he tried his best to do what he could, until he was no longer able to do so. He returned to God on December 16, 2021. Requiscat in pace! FUNERAL SERVICES: Visitation & Vigil: St. Vincent Church, Los Angeles; December 28, 2021 Visitation: 5:30pm Vigil Service: 7:00pm Mass of Christian Burial: St. Vincent Church, Los Angeles, December 29, 2021 at 10am Interment: Calvary Cemetery, 4201 Whittier Blvd., Los Angeles (following Mass)

Brother Tony passed away after a long time of suffering from cancer. He is preceded in death by his parents Clarence H. and Rose M. Wiedemer (Stauble) and his brothers, Edward and Thomas. He is survived by his sisters, Rita Stone and Theresa... View Obituary & Service Information

The family of BROTHER BERNARD JOSEPH WIEDEMER C.M. created this Life Tributes page to make it easy to share your memories.

Brother Tony passed away after a long time of suffering from...

Send flowers to the WIEDEMER family.