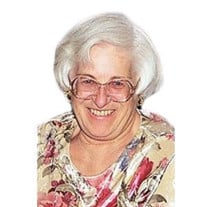 Barbara Jean Harutunian was born on September 23, 1935. In Los Angeles; and passed on Saturday, October 10. She was the 3rd of 5 children born to Sam and Agnes Harutunian. Barbara had 2 older brothers, Harry and John; and two younger siblings, Patricia and Sam. Barbara grew up in the Boyle Heights/East Los Angeles area. Barbara’s paternal grandparents shared the same family home. Like many Armenian families of the era, her grandfather and father together owned and operated a successful family rubbish business. Barbara was a unique Armenian child, with VERY blond hair and beautiful blue eyes. The family had an unbelievable bond among themselves. The siblings were inseparable, always. As adults, they spoke daily and saw each other almost as often. Their mutual love and bond was almost uncanny. The children grew up in a happy, active, energetic, privileged home environment. Like most Armenian families, the Harutunian family was loving, caring but also strict...especially with their daughters. Even though Barbara’s father was an only child, and her mother had 1 sister; Barbara and her siblings had innumerable family ‘friends and relatives’ that were all referred to as ‘Auntie or Uncle’. There were family friends in and out of the home constantly. Her mother and grandmother were incredible Armenian cooks; and enjoyed cooking for anyone and everyone who might cross the family threshold. Barbara attended Roosevelt High School and Los Angeles City College. In 1955 the family had a new custom home built in Los Angeles, bordering on Montebello. It was the center of love, and activity, which continued until Barbara’s health prevented her from living there 2 years ago. Tragically, in 1958, Barbara’s father died of a heart attack at the young age of 46, leaving behind his mother, wife and 5 children. The youngest two being ages 13 and 5. Barbara, while always respectful and obedient to her parents, also had a very independent streak and was stubborn. As a young woman she went to work outside the family home. Barbara spent most of her professional career at IBM. As a young woman, Barbara was the epitome of good taste and fashion. She was a gifted seamstress, and when she couldn’t find clothes to suit her discriminating taste, she made them. Sewing was a passion for Barbara, and she was a perfectionist. She created beautiful masterpieces for herself, relatives, and many of the youngest children of family and friends. Another passion was cooking and eating. She loved to do both. As a matter of fact, even within the last few months in her skilled nursing facility, she would exchange recipes with staff and give tips on the best way to bake or cook some specific delicacy. As a young woman, Barbara moved out of the family home and into her own apartment much to the chagrin of her parents. She lived in Westwood, and a highlight for her younger siblings and young cousins, was to host them at her apartment for a weekend. She did this often and it is still one of the best memories of growing up for her cousins. She would treat them to dinner at a restaurant and a movie...and this was when she could hardly afford to do so, as she was trying to earn her own living. It was an illustration of her giving/loving character. And what a character Barbara always was. Somebody said just last week that she was in heaven having a rip-roaring time. Perhaps you never had the pleasure of attending a sporting event with Barbara...yelling, screaming, all in good fun, especially if it involved the USC Trojans. As Barbara got older, her world started to shrink. She became the surrogate parent for all her siblings...seeing to their care and comfort at the expense of her own. It’s probably appropriate to even say she became a bit eccentric. Outward appearances became less important to her. Family, friends, food were her entire world. Barbara was very courageous, but the loss of Sam, Pat and John took an enormous tole on her. In addition to family, friends, food, Barbara loved music; live performances, sports, a good discussion that could easily get very loud and her Armenian Apostolic church and faith. This was probably the most important aspect of her life. She was an active member of Holy Cross church all her life. Not only was it her faith, it was an important part of her social activities. Getting together with the Ladies Aid and shopping and cooking for Friday night dinners; cooking for other holiday and special occasions...she loved it. Her last two years have been difficult. She had minor surgery which led to a dramatic decline in her health. But, regardless of where she called home, she was the life of the facility...hospital, skilled nursing, assisted living. Everyone cherished her spunk. Barbara loved a party. Her passing in this era of COVID is especially heart wrenching. Especially because the circumstances allow only this very small graveside memorial service, with no memorial reception. This would make her very sad. Barbara was met at Heaven's Gate by her loving parents, Samuel Seto Hartunian and Agnes Hartunian, and her siblings, Harry Hartunian, John Hartunian, Patricia Ann Hartunian, and Samuel Charles Hartunian. A small private service is being held for immediate family only. Donations can be made to Holy Cross Apostolic Cathedral or City of Hope. Condolences for the family may be sent through our website.

Barbara Jean Harutunian was born on September 23, 1935. In Los Angeles; and passed on Saturday, October 10. She was the 3rd of 5 children born to Sam and Agnes Harutunian. Barbara had 2 older brothers, Harry and John; and two younger siblings,... View Obituary & Service Information

The family of BARBARA HARUTUNIAN created this Life Tributes page to make it easy to share your memories.