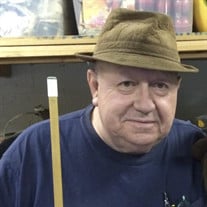 Arthur Clerance Callahan, 78, finally decided to make his way - on his own terms - after living nine lives and enduring multiple challenges and near-death experiences, incl. motorcycle accidents, heart attacks, and various health scares. He passed away Friday afternoon, Aug. 13, 2021, with his loving wife of 55 years nearby. He was a devoted husband, fiercely protective and loyal father, kind, gentle-spirited and thoughtful grandfather and friend. He will be remembered for his endless generosity, selfless service to others, and incredible work ethic. He was born, July 30, 1943, the second eldest of six and grew up in Erwin, TN. On December 11, 1965, he married the love of his life, San Juana Aranda. Together they are the parents of Ramona (Matthew) Curtis, Alice (Patrick) McCormack and Les (Sarah) Callahan, Savannah Camacho, and Pearl Callahan. He is the grandfather of Heather (Nico) Roulston, Taylor Curtis, Raven (Brian) Vincent, James McCormack, Meredith McCormack, Sarah Jane Callahan, Robbie Callahan, Malikai Camacho, and Noah Camacho. He also has three sisters, Pat (Gene) Grossenberg, Sherrie Welcher, and Nety Pepper, along with brother Jimmy (Heidi) who survive him. He was preceded in passing by his daughter, Connie Francis, and brother, Harold. Art, as friends called him, worked most of his career at Pacific Bell until his retirement in 1999 but enjoyed working at Carl’s Jr. and the GTE Corporation beforehand. He was a gritty man’s man who would clean the oil off his hands after working on his old ’57 pickup by pouring gasoline on them and scrubbing with a steel wire brush, then clear the dirt from his nails with his knife. He loved projects – when he was younger, you could always find him tinkering in the garage on old cars, reupholstering furniture or remodeling some aspect of his home. He was unafraid of tackling any project – there was none too great or small for him to approach with the greatest confidence. He was often buried in books reading his beloved Louis L’Amour novels, home improvement encyclopedias or anything that would teach him something new – he was a lifelong learner. In later years, during retirement, he would often help his kids with remodeling projects, including the installation of hardwood floors, plumbing, electrical, framing, or hanging drywall, etc. He could literally do anything. He loved to travel to see his siblings, cousins, aunts, and uncles scattered throughout South Dakota, Ohio or his home state of Tennessee. A Celebration of Life service will be planned for 3pm on Sunday, September 26, in Glendale, CA, at the Glendale City Church, 610 E. California Ave., Glendale, CA. Condolences may be sent to the family through our website.

The family of ARTHUR CLERANCE CALLAHAN created this Life Tributes page to make it easy to share your memories.